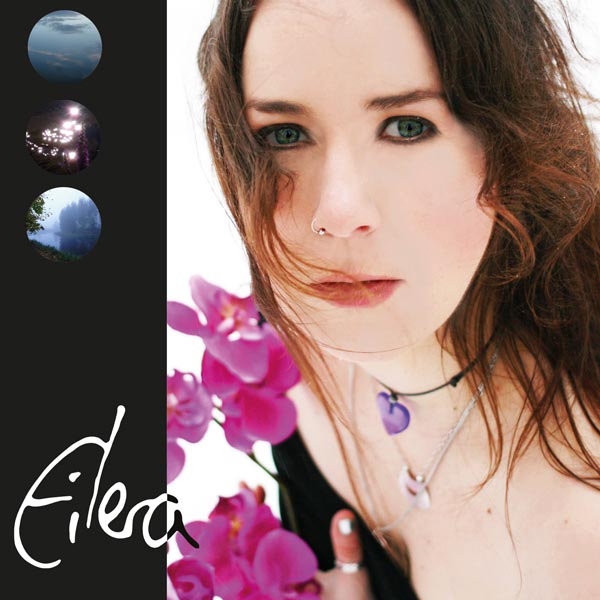 Energetic Rock/Metal with Scandinavian feel, recorded live in studio. In this production intertwine the bright light and the melancholy that are characteristic of Finland, warmed up and lit up by Aurélie’s voice. Her original style and the techniques developed in her previous record can both be heard here.

Chain D.L.K. (USA) ” For me, the mass appeal of an artist who can engage a wider audience with this kind of music is just fantastic.”
Legacy (DE) review + interview ‘Face Your Demons’ ist schlicht ein schönes Album, das die Zielgruppe glücklich machen wird! 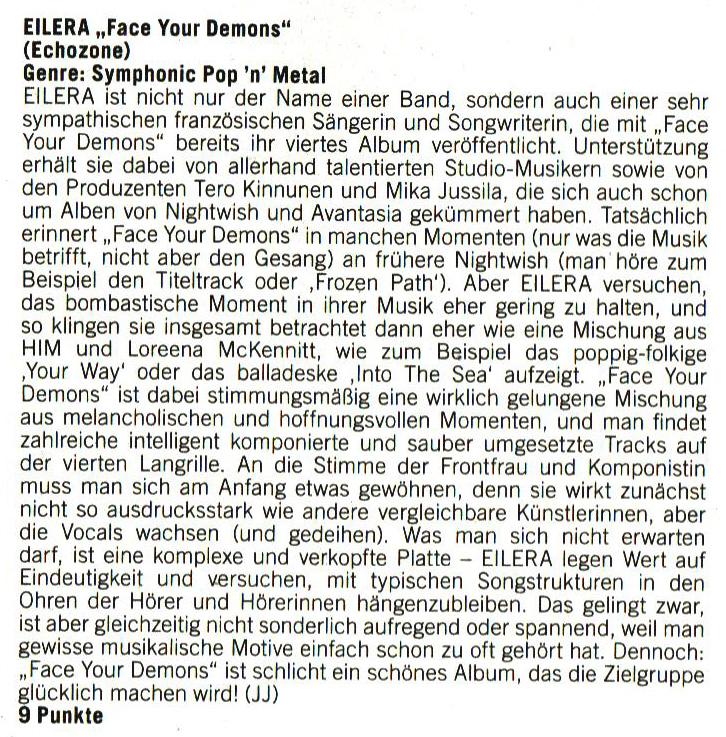 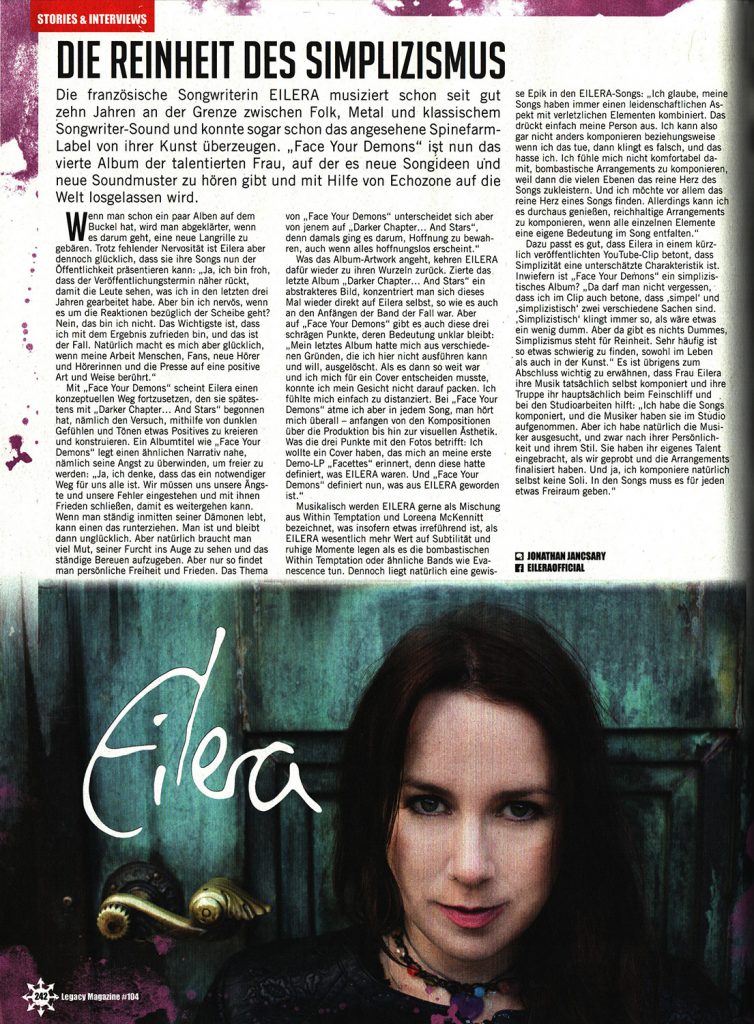 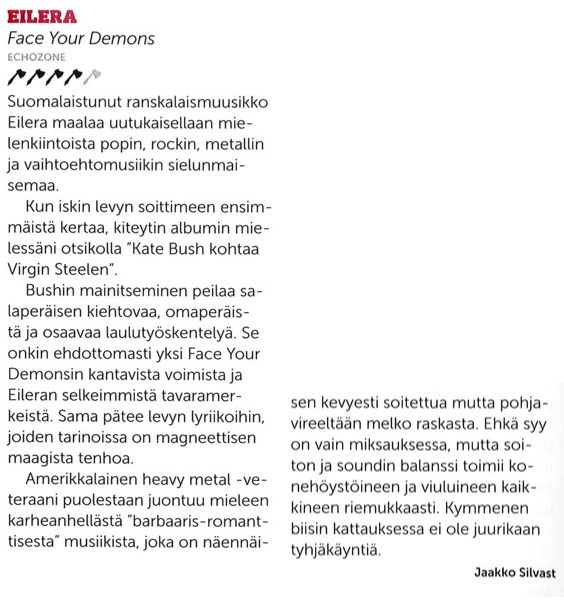 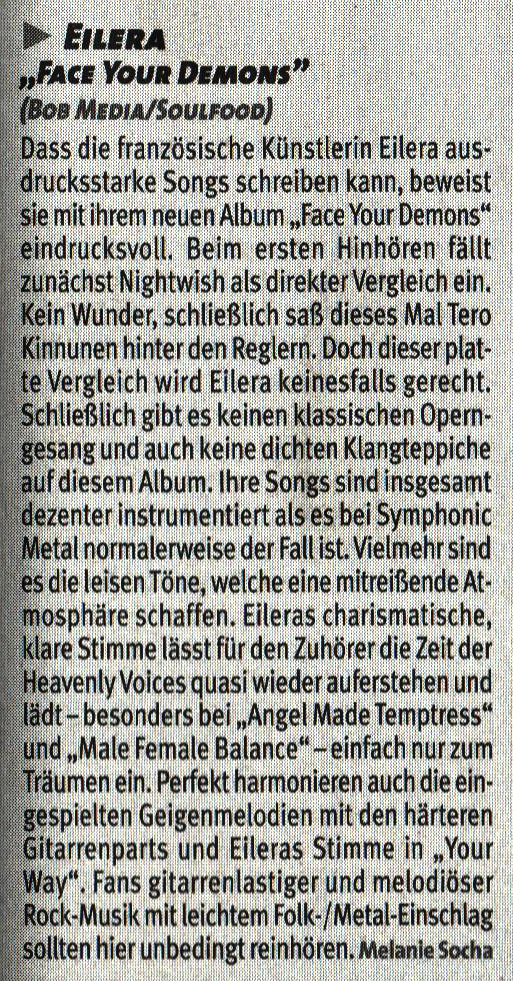 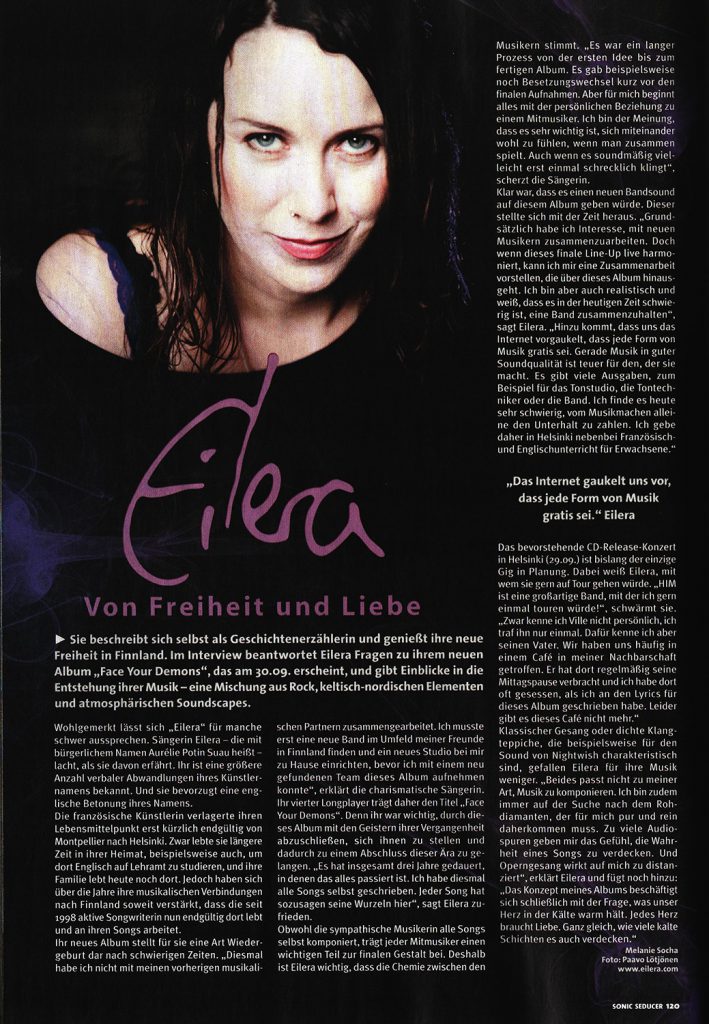 Face Your Demons is a phoenix rising from ashes. Following the end of her collaboration with Loïc, Aurélie re-located in the yang of her life, Finland. Now without a home-studio and even a home, she had everything to rebuild. And little by little, she did.
The first songs of Face Your Demons were written and played on friends’ couches and on an acoustic guitar which was given to her by Kiko Loureiro (Angra, Megadeth) after they had met at the Finnish Metal Meeting in Helsinki. Eilera gradually met musicians she could build the songs together with.
The first two songs to be finished were Frozen Path and Into the Sea. In a quest to determine the sound-production for the album, Eilera went to the Finnvox Studios – which had already been the house of her two previous records, and recorded the songs together with session musicians. Co-producer on this new adventure would be Eilera’s old friend Tero Kinnunen (Nightwish).
Finding however this first production attempt not quite right for her new songs, Eilera resumed working. She met more musicians, rehearsed more, until she found what would be the band of the Face Your Demons era. During this process, she booked the Artlab Studio in Helsinki for the live shooting of three live videos for the songs Deadly Together, Angel Made Temptress and Your Way. Filmed and produced by her old friend Mitja Harvilahti (Moonsorrow), those songs gave her the missing key she needed : this live sound would be the sound of the album. After the release of those videos and three first singles, Eilera and her band recorded live the rest of the album. Face Your Demons thus gathers performances by drummers Waltteri Väyrynen (Paradise Lost, Bloodbath), Toni Paananen, guitarists Jani Lyttinen and Roni Seppänen (Wheel), Jan Sormo, Lauri Salomaa and a strings ensemble.
Face Your Demons was released in partnership with Echozone/Bob-Media and distributed in Europe by Soulfood. Shows were played in Finland. More video work was released.
To Eilera, this album would be her « Finnish album », as for the first time, she entirely wrote, composed and recorded it in Finland.